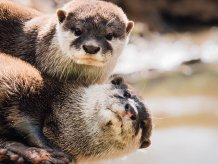 Otters learn from each other – but solve some puzzles alone

Otters learn skills from each other – but they also solve some mysteries alone, new research shows.

The otters in the study, which live at Newquay Zoo and the Tamar Otter and Wildlife Centre, decided whether food was safe and desirable to eat by learning from each other.

But they used their own wits – not the example of others – to figure out how to extract the food items from their protection.

“Much of research into the extractive foraging and learning capabilities of otters has focused on artificial food puzzles,” said lead author Alex Saliveros, of the Centre for Ecology and Conservation on Exeter’s Penryn Campus in Cornwall.

“Here, we were interested in investigating such skills in the context of unfamiliar natural prey, as well as in relation to artificial food puzzles.”

The team studied the otters’ social groups before the food tests, meaning the scientists knew how often each otter associated with other individuals.

Social learning could then be measured by seeing whether close associates learned quickly from each other.

The otters were given five variations of the puzzle box, each with a meatball (a familiar food) visible inside. The method to extract the food varied in each version – with solutions including pulling a tab and opening a flap.

The natural prey were rainbow trout (which acted as more of a control given their lack of a protective shell), shore crabs and blue mussels.

Of the 20 otters in the study, 11 managed to extract the meat from all three types of natural prey.

“Asian short-clawed otter populations are declining in the wild, and understanding their behaviour can help in the development of conservation and reintroduction programmes," said Saliveros.

“The captive otters in this study initially struggled with natural prey, but they showed they can learn how to extract the food.

“Our findings suggest that if you give one otter pre-release training, it can pass some of that information on to others.”