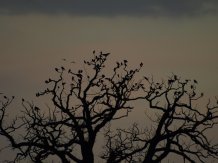 Jackdaws use a "democratic" process to decide when to leave their roosts en masse, new research shows.

In winter, jackdaws roost in groups of hundreds or even thousands, and it is common for most or all of the birds to take flight in a sudden mass departure around sunrise.

In the new study, a team led by the University of Exeter recorded the rising racket of jackdaw calls that happens before mass departures at various roosts in Cornwall.

By combining this with tests in which pre-recorded jackdaw calls were played at a colony, the team found evidence that the birds' calls are used in a form of "consensus decision-making".

"After roosting in a large group at night, each jackdaw will have a slightly different preference about when they want to leave, based on factors like their size and hunger," said Alex Dibnah, who led the study as part of a Masters by Research at Exeter's Penryn Campus in Cornwall.

"However, it's useful to reach a consensus. Leaving the roost together has various benefits, including safety from predators and access to information such as where to find food.

"Our study shows that by calling out jackdaws effectively ‘cast a vote’ and, when calling reaches a sufficient level, a mass departure takes place."

The research team – which included the University of Cambridge and Barcelona's Centre for Ecological Research and Forestry Applications – also found:

-          Mass departures happened almost instantly, with all departing birds in the air within less than five seconds on average.

-          These departures took place in the period from 45 minutes before sunrise to 15 minutes afterwards. Rain and heavy cloud tended to delay departures.

-          Playing recordings of roosting calls brought forward the time of the first mass departure by an average of more than six minutes.

-          Recordings of wind noise did not lead to earlier mass departures, suggesting that the birds respond specifically to calls of their fellow birds (not to noise in general).

Jackdaws did not always leave their roost in mass departures. If the level of calling did not rise sufficiently, roost members failed to reach a consensus and instead left in a stream of small groups.

Commenting on the wider significance of the research, Professor Alex Thornton – of Exeter's Centre for Ecology and Conservation – said: "It helps us to understand how really large groups of animals can coordinate their actions – something that has rarely been tested in detail before.

"Also, our findings provide further evidence that vocalisations are really fundamental in allowing some species to reach group decisions – so we need to investigate what happens when we as humans create noise pollution that might influence how information spreads through these social groups.

"The next stage of our research will look into this."

The research was funded by the Human Frontier Science Program.