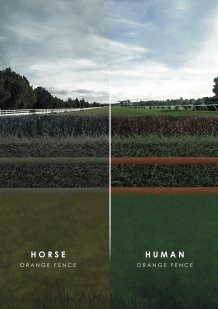 As horses have reduced "dichromatic" colour vision compared to humans, they see mainly hues we would perceive as blue and yellow, and are unable to tell apart shades of red, green, and orange.

Racing at Stratford Upon Avon on 14 March will mark the start of a new era over jumps in Britain as obstacles begin turning white as part of a welfare-driven project to develop new ways to help make hurdle and fence design safer.

The transformation, to be gradually phased in over 10 months, will see an estimated 368 fences and 2,132 hurdle panels across 40 racecourses change markings from the traditional orange to white.

The project, which is being delivered by the Horse Welfare Board as part of the ‘Life Well Lived’ strategy, follows intensive research carried out by Exeter University during 2017-2018 into equine vision, commissioned by the British Horseracing Authority (BHA) and backed by The Racing Foundation.

131 obstacles were analysed across 11 racecourses using cutting-edge camera equipment to establish which colours would be most visible to a horse.

Once identified, behavioural responses were then tested with 14 horses from Richard Phillips’ training yard in Adlestrop, Gloucestershire.

Research by the University of Exeter focused on trialling different colour options in a variety of racing environments and weather conditions, including the traditional orange markings.

As horses have reduced "dichromatic" colour vision compared to humans, they see mainly hues we would perceive as blue and yellow, and are unable to tell apart shades of red, green, and orange.

The study found that changing the wood and vinyl padding of take-off boards, guard rails and top boards to white provided increased contrast and visibility for horses, leading to improved jumping performance.

Fluorescent yellow was found to have a similar positive impact, but the colour faded rapidly in tests, leading Exeter to ratify the racing industry’s decision to select white as a valid choice going forward.

The "orange to white" project was progressed the following year but was put on hold due to the onset of the pandemic.

Now led by Mike Etherington-Smith, Equine Safety Advisor to the Horse Welfare Board, a cross-industry working group of trainers, jockeys and racecourse representatives has driven the project forward, with key racing bodies green-lighting implementation in November 2021 and the Horserace Betting Levy Board confirming funding in January this year.

A phased roll-out of new white markings will begin from March 2022 with courses carrying out the work after the close of their season.

Nine courses will make the change during the first six months (March-August) with all jumps tracks to have made the switch by December 2022. Point to point courses will follow for the 2022/23 season.

Barry Johnson, Chair of the Horse Welfare Board, said: "This important project is an example of how British racing uses advanced scientific and veterinary research to constantly improve racehorse welfare. Looking through the eyes of the horse to understand how they perceive their world, and making changes because of this new knowledge, shows how racing is continuously striving to increase the safety of all participants in our sport, both human and equine."

James Given, Director of Equine Health and Welfare for the BHA and member of the Horse Welfare Board, added: “We are determined to drive constant improvement and to make reasoned, well-researched and evidence-based changes which further reduce risk in the sport on a permanent, long-term basis and which help to improve safety factors for our horses.”

Trainer Richard Phillips commented: “Having been involved in the research undertaken by Exeter University and having used white obstacles for over three years now, I am convinced that changing the colour of jumps will be of immense benefits to the horses, riders and the sport as a whole.”

Professor Martin Stevens, Chair in Sensory and Evolutionary Ecology for the University of Exeter, said: “The project is an example of how scientific research can lead to positive changes in human society and our interactions with animals and I’m delighted that the research we undertook has led to changes in the sport.”

Caroline Davies, Racecourse Services Director at the RCA and the racecourse representative on the Horse Welfare Board commented: “I am pleased to see the roll-out of the orange to white initiative take place across Britain’s racecourses, adding a further layer of care for our horses.

“This is an important step for British Racing, underpinned by a plethora of research. The number of obstacles that racecourses will be changing is significant and is testament to the sports commitment to making continual improvements for all our participants. I am grateful for the widespread support of racing’s stakeholders and our funders to enable it to happen.”

The faller rate in British racing has reduced by one third over the last 20 years as a result of ongoing investment in racecourse safety, and constant enhancements in racehorse and training standards.

Following on from their debut at Stratford on 14 March, the new white obstacles will next be seen at Hexham on 17 March and Newton Abbot on 25 March.

They are already being introduced at racing’s main schooling grounds and will be in use throughout the summer jumping season.